This chapter is following the liquid metal route to explore the economic potential producing non-expensive stable foams. However, foams made by gas injection cannot be stabilised without the addition of stabilising particles (e.g. SiC or Al2O3), which affect the price of the final product tremendously. Created bubbles in pure melts just rise to the surface and collapse, similar as it is known for a glass of champagne. Hitherto a minimum concentration of around 10 Vol.% SiC is r equired to allow foam expansion using particles of 5-20 µm in diameter. The smaller such particles are and the higher the oxygen concentration of the injected gas is the lower the required volume concentration is. A successfull foaming study followed by the "Formgrip-process" was already performed by using nm-sized Spinell particles, see the figure on the right. But the background and understanding how such particles behave and what eventually stabilise foams is still under dispute.
Ip et al. and Kumagai et al. made use of the surface tension acting as stabilisation factor of particle-reinforced foams. Former suggested that wetted particles are more useful to prevent cell wall thinning till extinction as the surface tension counteracts nearing film surfaces. A similar behaviour was also found for foams made using blowing agents. Körner et al. found that particles or oxide networks can establish a disjoining pressure inside films preventing film surfaces to merge, similar to known aqueous foam theories. The group of Kumagai followed a more theoretical approach whereby capillary suction into Plateau borders gets reduced by modifying the radius of the film by partial wetted particles. A total different starting point was published by Wübben and Banhart concerning a barrier mechanism. They showed that particles, which block cell wall channels or are captured by nearing film surfaces, establish a barrier and hinder the melt leaving the film. If such particles align ordered was theoretically proposed by Kaptay, but never approved by experimental results. All these approaches seem conceivable, but to stabilise a film effectively, and not only retards coarsening, particles have to be fixed at a certain position in the liquid state. Otherwise, viscosity is only enhanced by added particles, which decelerates drainage. However, this is sufficient to stabilise foams, made of high viscous melts by foaming using blowing agents, till solidification within only >100 s . Due to this short foaming time coalescence and coarsening are retarded and thus avoided, but long time stability cannot be given. In contrast, foams produced by gas injection using an oxidising medium (e.g. air) can be stabilised for 100 min almost without any coarsening. Why such foams are so stable was also attempted to be answered by a simpler model system, called single films. Thereby authors confirmed the importance of a present oxide layer, as it was already discussed concerning foams. Furthermore, they found that this oxide layer not only retards the retraction of a rupturing film, it even fixes particles at a certain position and hinders the rupture to expand any further. Therefore we develop different methods and composites to extend the knowledge about the role of particles, why they are required, how they act and if they have to be present anyway. Thus the current study can be seen as a first step towards particle-free foams, which might lead to an industrial breakthrough.

In the following several different materials are shown which are already commercially available or currently studied.

During my stay at the CNRC, Boucherville, Canada, I was involved in optimising the X-ray Micro-CT, the existing image analysis systems as well as the implementation of new analysing methods to investigate titanium powders.
The background of my work was motivated by large scale deployment of additive manufactoring processes (AM) as part quality relies specifically on the presence of internal defects and part-to-part consistency. Some of the defects observed in finished parts have been associated with porosities in the powder feedstock used in AM processes including powder bed, laser cladding, and cold spray. Since the level of porosity in these powders is generally very low, standard characterization techniques such as pycnometry, and metallography with image analysis, are not suitable for quantification. Investigating powders by using X-ray tomography and image analysis offer a new approach combining high resolution images with an automated 3D image analysis routine to evaluate and quantify porosity in titanium powder feedstock. The effects of acquisition parameters and image analysis procedures on porosity quantification were investigated to validate the proposed method and assess its reliability. Data demonstrate that the proposed technique is sufficiently sensitive to differentiate powders with different porosity levels.

First we concentrated on the image acquiring process by X-ray tomography to achieve optimal raw data. The first figure compares the obtained results when the images of the powder (Ti) are averaged on 8 frames or not; the impact on the grey value scales is also shown. Finally, one of the first steps during the image analysis routine is to use a median filter to increase phase distinction: the impact of the filter on the images and grey values is presented in Figure 1 too. 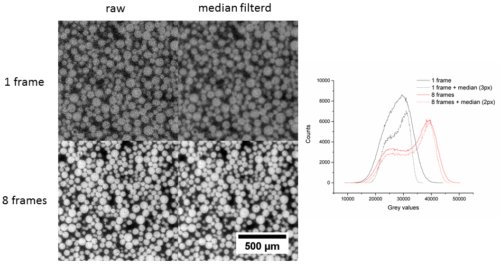 But also the reconstructed voxel size on the obtained images was investigated. While, only a small difference in image sharpness was found for 3 Âµm and the 10 Âµm voxel sizes, the image analysis routine was not able to analyse the 10 Âµm image without the use of a median filter, which creates a lot of artefacts (powder merging).

The segmentation process yields similar results when we compare the 3 and 5 Âµm voxel size images, see image above. Now, when the results of the image analysis routine for the three resolutions are compared quantitatively (lower figure), it is clear that scanning at a resolution of 10 microns is not enough for the Ti-powder. An example of the segmentation in 2D and 3D can see in the figures below Another crucial powder characteristic for powder producers and part manufacturers alike is the presence of pores inside particles and the quantification of their volume fraction. Only on the optimised images above an image analysis routine can be performed to separate individual pores and to quantify those. The final result of the pore size separation can be seen in the lower movie.