Metallic foams can be produced directly by gas injection or indirectly by foaming using a blowing agent and are mainly based on aluminium and its alloys. Both ways have their advantages depending on the desirable pore size and distribution, density and mechanical properties. One other factor is the price, whereby foams made by gas injection are way cheaper as expensive blowing agents are not being mandatory. Thus this research topic is following the liquid metal route to explore the economic potential producing non-expensive stable foams.
Our main study is concentrated on various Al-alloys containing different types and concentrations of particles. As a basic and reference the known well foamable composite F3S20S produced by Alcan, Montreal, Canada is used. This material consists of 20 vol.% SiC particles, mean particle diameter 10 Âµm, embedded in an AlSi9Mg0.6 alloy.

Although gas injected foams exhibit a great costeffective potential, they cannot be stabilised without the addition of stabilising particles (e.g. SiC or Al2O3), which again affect the price of the final product tremendously. Created bubbles in pure melts just rise to the surface and collapse, similar as it is known for a glass of champagne. Hitherto a minimum concentration of around 10 Vol.% SiC is required to allow foam expansion using particles of 5-20 Âµm in diameter. The smaller such particles are and the higher the oxygen concentration of the injected gas is the lower the required volume concentration is. But the background and understanding how such particles behave and what eventually stabilise foams is still under dispute. Ip et al. and Kumagai et al. made use of the surface tension acting as stabilisation factor of particle-reinforced foams. Former suggested that wetted particles are more useful to prevent cell wall thinning till extinction as the surface tension counteracts nearing film surfaces. A similar behaviour was also found for foams made using blowing agents. KÃ¶rner et al. found that particles or oxide networks can establish a disjoining pressure inside films preventing film surfaces to merge, similar to known aqueous foam theories. The group of Kumagai followed a more theoretical approach whereby capillary suction into Plateau borders gets reduced by modifying the radius of the film by partial wetted particles. A total different starting point was published by WÃ¼bben and Banhart concerning a barrier mechanism. They showed that particles, which block cell wall channels or are captured by nearing film surfaces, establish a barrier and hinder the melt leaving the film. If such particles align ordered was theoretically proposed by Kaptay, but never approved by experimental results. All these approaches seem conceivable, but to stabilise a film effectively, and not only retards coarsening, particles have to be fixed at a certain position in the liquid state. Otherwise, viscosity is only enhanced by added particles, which decelerates drainage. However, this is sufficient to stabilise foams, made of high viscous melts by foaming using blowing agents, till solidification within only >100 s. Due to this short foaming time coalescence and coarsening are retarded and thus avoided, but long time stability cannot be given. In contrast, foams produced by gas injection using an oxidising medium (e.g. air) can be stabilised for 100 min almost without any coarsening. Why such foams are so stable was also attempted to be answered by a simpler model system, called single films. Thereby authors confirmed the importance of a present oxide layer, as it was already discussed concerning foams. Furthermore, they found that this oxide layer not only retards the retraction of a rupturing film, it even fixes particles at a certain position and hinders the rupture to expand any further. Therefore we developed different methods and composites to extend the knowledge about the role of particles, why they are required, how they act and if they have to be present anyway. Thus the present study can be seen as a first step towards particle-free foams, which might lead to an industrial breakthrough. 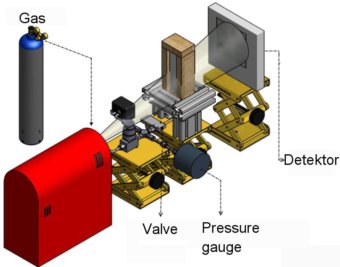 Gas injection furnace inside the cone beam of a microfocus X-ray device and an image sequence of the foam expansion of AlSi9Mg0.6+20p SiC

Audioslides of my paper: Stabilisation of aluminium foams and films by the joint action of dispersed particles and oxide films